Porting MultiWii to Arduino DUE

Porting MultiWii to Arduino DUE

GitHub is here  please compile code on Arduino-1.5.6r2 or later.

Arduino DUE is a microcontroller board based on the Atmel SAM3X8E ARM Cortex-M3 CPU. It is the next generation of Arduino boards “UNO, Nano, Mini”…etc. It is a very attractive platform for building quadcopter firmware on for the following reasons:


·         CPU Clock at 84Mhz compared to 16MHz for other Arduino.
All these advantages do not come without a cost. The main two disadvantages from current quadcopters firmware and hardware are:

1- This warning message on Arduino website “Warning: Unlike other Arduino boards, the Arduino Due board runs at 3.3V. The maximum voltage that the I/O pins can tolerate is 3.3V. Providing higher voltages, like 5V to an I/O pin could damage the board.” This means that you cannot just attach your current 5V logic hardware to Arduino DUE.

2-      There is EEPROM memory in Arduino DUE L. And this is another very sad news as you need to have EEPROM in order to be able to save PIDs, sensors calibration values and many other values used for quadcopters. They need to be saved somewhere and without EEPROM you need to use external flash memory which is extra hardware and extra interface.

I can see that these two reasons strongly affected firmware developers to use Arduino for quadcopters. But as we will see below these were only illusions. 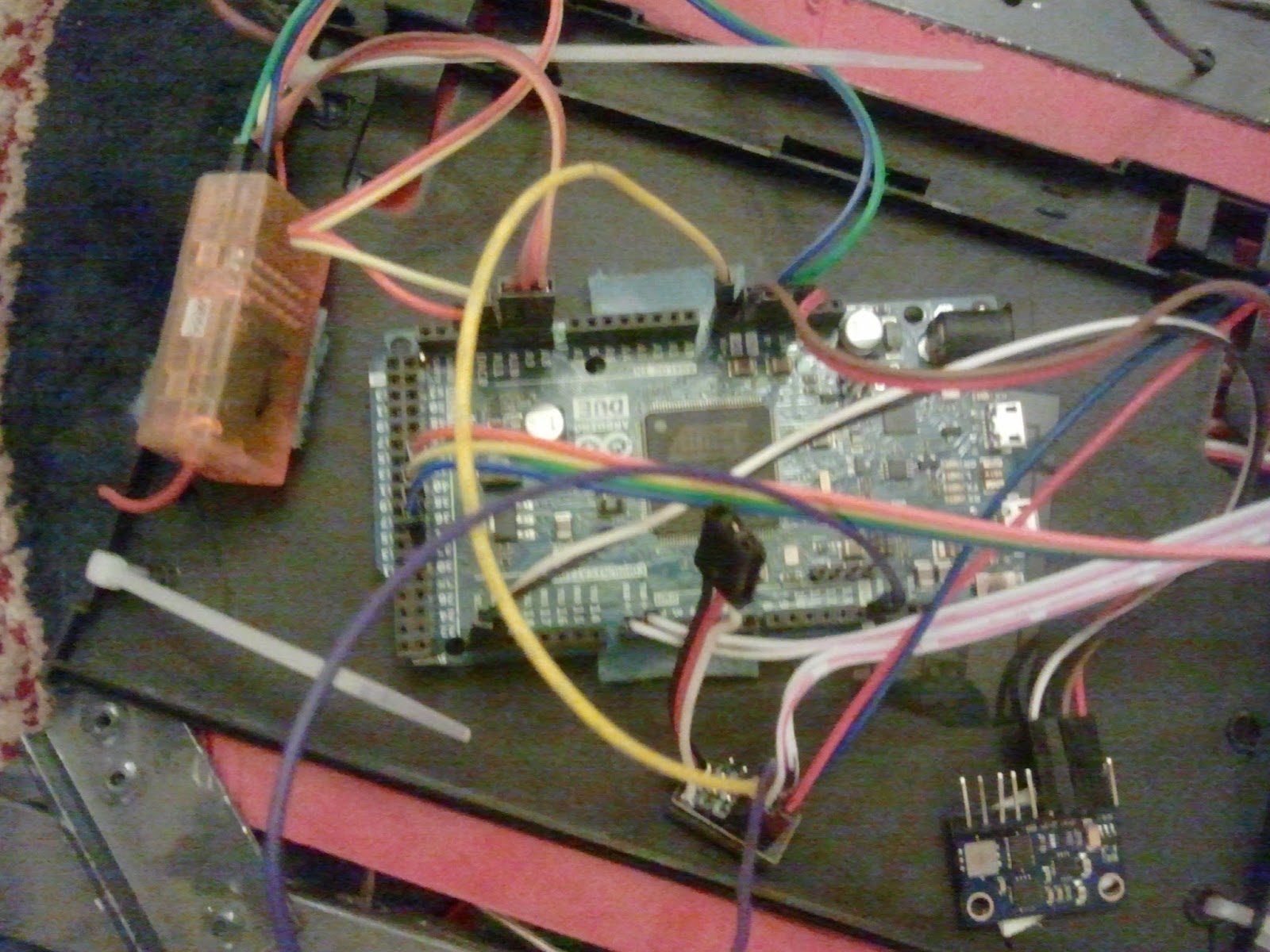 Naze32 was the first 32-bit board I see for MultiWii. When I found the code for the first time, the first thing I searched for is that EEPROM problem and how can we solve it. Well the solution was obvious; you can use Flash memory instead of EEPROM. You can store the data together with the code.
WAW; I said to myself. It is very nice simple approach. So I searched for similar code for Arduino DUE, and I found one written by cmaglie. That is 50% of the problem solved J

Now back to the 3.3V issue, well it seems someone has the courage to try the 3.3V and guess what, it worked J. I contacted Rouan to make sure that there is no 3.3V tweeks that I need to make, and the answer was no. I believe the 3.3V works with no problems for the following reasons:
1-      For ESC logical 1 is less than 3.3V so 3.3V as input signal for ESC is more than enough to control it.
2-      For RX seems that logical 1 is either less than 5V of maybe because the input is a pulse of with 2ms max with frequency 50Hz makes the average DC is not enough to burn the input pin.
Again the 3.3V is not an issue anymore J

Well, I am no longer the first one –I know- to write quadcopter code on Arduino DUE, Rouan has already made it. So I decided to pick for myself a new challenge, and I chose to convert MultiWii firmware for the following reasons:
1-      It is a very famous firmware, well known and not so complex.
2-      It is already built to talk with Arduino boards, so supporting Arduino DUE is a natural extend for the firmware.
3-      Arduino community as well as MultiWii community might find this conversion useful to start with to build much powerful updates, as the current code takes only 9% of the available Flash memory.

Steps of porting MultiWii to Arduino DUE

My target is to build MultiWii code that you can still compile it on 8-bit Arduino boards. It is not a dedicated version for Arduino DUE –although a next version might be so-.
So I first need to figure out where to put changes and where to keep old code. In the remaining part, I will mention the major changes as well as major challenges I faced during this process.

As in all MultiWii code, you need to define specific code for specific board, and I have chosen to use ARDUINO_DUE as the mark. All code under ARDUINO_DUE is specifically compiled when you choose to compile for Arduino DUE only. Some code in MultiWii is generic for all boards, but I can only be executed for 8-bit microprocessors not ARM, for these parts I use #if !defined (ARDUINO_DUE)

This is the file you need to edit to define now sensors, vehicle, board ...etc. It is a core file. I started with it and defined:
1-      When ARDUINO_DUE is active.

ARDUINO_ARCH_SAM is what you need to look for to detect an ARDUINO_DUE.

I used Multiwii version 2.3 as my starting point. Most of the other code is same as MultiWii, Dramatic changes where in EEPROM.cpp Sensors.cpp, RX.cpp and Output.cpp

EEPROM.cpp I used cmaglie Flash class –I updated a paging issue in it- to save configuration structures.

Output.cpp Again I used Rouan code, but this time it was more tricky to embed with original code of MultiWii due to logic of motor/servo selection and different PWM signal generation.

Sensors.cpp I used original wire.h library, however I renamed it Wire_DUE.h and included as part of the project as I intend to update it later to make it fast. I replicated the same I2C functions that is used in MultiWii so that sensors logic stay untouched. Functions used Wire_DUE.h instead of original code when compiling for Arduino_DUE.

scale = (currentT - previousT) * (GYRO_SCALE * 65536);
Scale variable that is vital for measuring angular velocity of Gyro was giving hopping from 0 to 100 even without touching any sensor. The behavior disappeared when I used int32_t for both currentT & previousT as used in the main loop in Multiwii.cpp

The code is not 100% converted i.e. not all features, however you compile it for Quadcopter or Tricopter and fly in different modes. I have not test GPS, sonar. I only used GY_80 as well as the HK 328 board.

Code is still under development, and as any firmware it can contain serious issues, so fly safe and on your own risk.

Posted by Mohammad Hefny at 8:17 PM